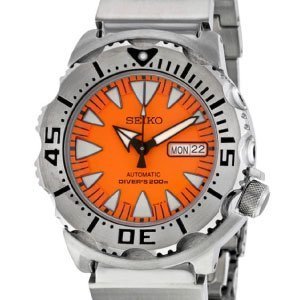 Are you looking for a great watch but don’t know where to start? Well, look no further than Seiko watches! Seiko watches are renowned for their quality and reliability, with a number of different models to choose from. But did you know that each of these models has its own nickname?

Read on to learn all about some of the most popular Seiko watch nicknames and the stories behind them:

The Seiko Monster has been a part of the watch scene for nearly two decades and has had a multitude of variations produced. It has earned its nickname from its menacing face, seemingly lined with sharp teeth. The initial and third iterations of this timepiece are closer to the classic look, while the second generation is a much more daring design.

The Seiko Monster stands out from the rest of the Seiko collection with its huge and eye-catching elements. It’s built with tough steel parts and has a fierce look that makes it highly sought after. Its bright hands and indexes, along with the luminous MONSTER lume, give it a bold and powerful presence.

The Seiko Samurai was a watch released in 2004 and produced until 2008. Its design was notably characterised by a shape resembling that of a Samurai sword on the hands of the watch, which earned it the nickname of “Samurai” from enthusiasts. The model has since been brought back into production, and various special editions have been released.

The Samurai was a wristwatch from Seiko that was originally made from steel but was later changed to titanium. The watch was known for its strength and reliability and was popular due to its 7S35 movement. Production of the Samurai eventually stopped, but it was seen as a reliable and tough diver watch before then.

It is believed that the name of this timepiece originated from its oversized case when put up against its 20mm band. Also, the 12 o’clock mark on the face resembles the ‘Mawashi,’ the traditional undergarment worn by sumo wrestlers during a match.

The Sumo watch is very large and heavy, making it too big to be comfortable for people with smaller wrists. It is 44mm wide and weighs 170 grams.

4. The Seiko Tuna Can

In 1968, a professional diver wrote to Seiko and complained that the existing diving timepieces were not robust enough to handle the harsh environment of saturation diving. After seven years of development, Seiko finally released the Seiko Marine Master Professional in 1975, which is often referred to as the “Grandfather Tuna” and is considered to be the most robust and reliable diving watch ever made. This model set the standard for all Tuna watches to come.

In 1975, the watch was something that had never been seen before. The case was made of titanium, with an L-shaped gasket providing an unbeatable defence against helium gas. The band was like an accordion, made from rubber, and the protective shell gave the watch its iconic tuna-can design.

There are a ton of other Seiko watches you can find, from the Seiko Turtle to the Seiko Willard and so much more. Each of these watches has its own specific story to tell and history to share, and they’re all incredible watches in their own right. So, what are you waiting for? Keep an eye out for these watches and even consider modding your Seiko watches to pay homage to these amazing watches.

Seiko Mods offers a large variety of custom Seiko mod parts to help individuals create unique and stunning watches. Check out what we offer today and create your dream watch.