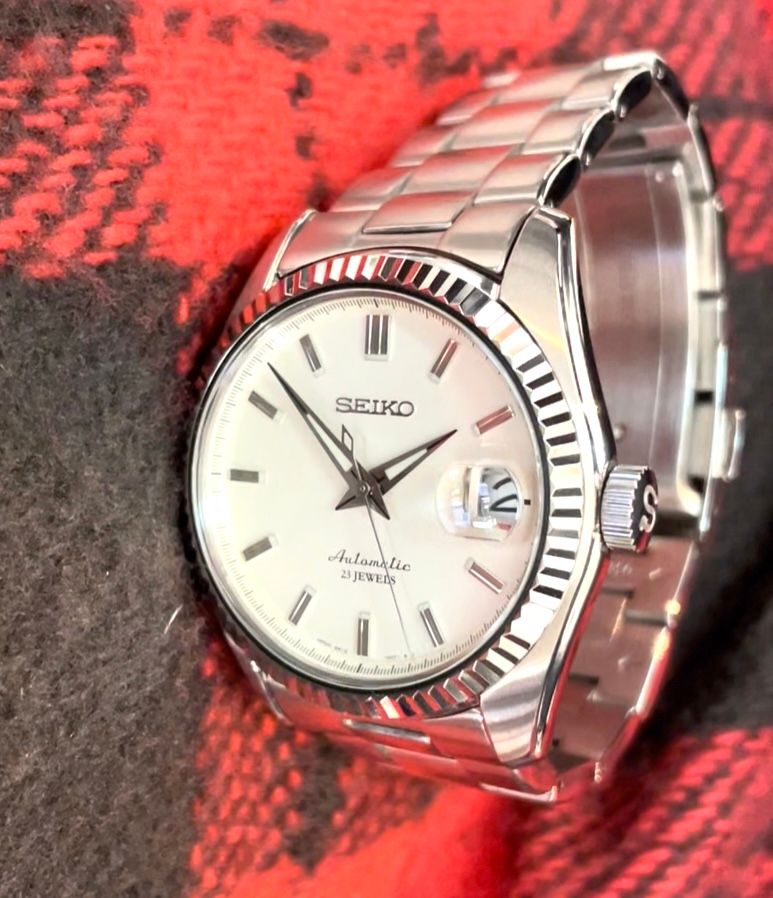 The watchmakers were on a mission to have the watch’s dial represent the natural beauty of the mountains after introducing the Spring Drive movement in 2004, where the movement and location of the barrel and train were to mimic the lovely view from the watch studio.

Modern watchmakers discovered a dial sample that had the appearance of freshly fallen snow in the 1970s, which led to the creation of the dial’s original design. A brass plate was stamped to start the process of making a new dial, but the true challenge was figuring out how to make the dial’s pristine white and textured appearance without sacrificing the design.

After extensive experimentation, the Grand Seiko designers eventually settled on employing a silver plating procedure. An initial prototype was created, and the technique ultimately varied and changed the immersion time for silver plating, bringing the dial to be pure white while maintaining the texture and avoiding the use of a white hue.

Below are the unique features of the Grand Seiko Snowflake.

The Grand Seiko Snowflake’s movement is extremely precise, and the casing has also been polished using the Zaratsu technique. It takes years to perfect the process of working with materials that are harder than steel.

The flat surfaces can be highly polished with this technique without distorting them. This is visible on the Snowflake, where two planes collide, producing a mirror finish with a sharp ridge between the mirror and hairline surface finishes.

Although the watchmakers didn’t give the SBGA011 the Snowflake moniker, Grand Seiko swiftly included the term in the allusion. The tempered blue hand moves fluidly over the dial that resembles snow, alluding to the passage of time in the natural world.

The Spring Drive reference is located at 6 o’clock on the dial. Then you will find the power reserve at 8 o’clock. At three o’clock, there is a date window as well. The hands and indexes are polished silver in colour, with the exception of the seconds hand that is blued.

Like its predecessor, the SBGA211 has a case diameter of 41mm and a thickness of 12.8mm. The bracelet and watch case are both made of high-intensity titanium, which makes the watch quite light to wear.

The watch from Grand Seiko weighs 100g or 3.5oz. A screw-down crown and case back allow for a 100m water resistance on the case.

The 9R65 Spring Drive movement, which combines the finest of automatic and quartz technology, powers the watch. The Spring Drive features a 3-day power reserve and is accurate to +/- 15 seconds per month.

Most people associate the Grand Seiko Snowflake with the SBGA011 and SBGA211, which have dials that resemble white snow. Grand Seiko has nevertheless made further allusions to the same methodology over the years.

As long as it remains in production, the Grand Seiko Heritage Collection Snowflake will serve as the company’s unofficial flagship model. Due to its recognisable dial, which collectors adore, the Snowflake typically keeps the majority of its value.

In light of the effort and skill that went into making the Snowflake dial and the Zaratsu polished titanium casing, the original retail price of this coveted model is a modest $5,800.

Find Seiko parts in the UK at Seiko Mods! We have been in this industry for ten years, serving the modding community with Seiko mod parts. Our specialty is developing custom parts for Seiko watches, including Sapphire Crystals. Contact us now to learn more!