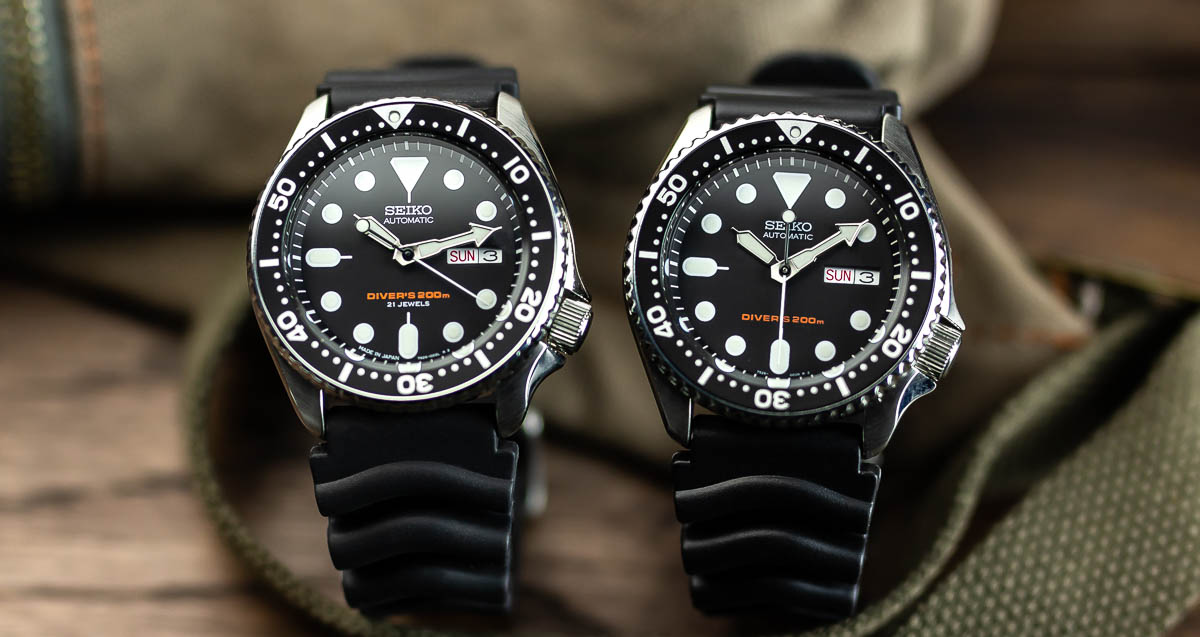 Within the past few decades, Seiko has effortlessly rocked the world of Haute Horlogerie with its full line of models that have changed the way consumers know timepieces.

Although each model produced by the Japanese watchmaker has its respective impact on the excellence that anyone expects from a watch, there are two that stand out: The SKXK and SKXJ.

The tale of two SKXs

While these two watches both come from the successful SKX line that is well-loved thanks to the likes of the 007, 009, and 013, they aren’t just lazy products of their counterparts. Today, the Seiko SKXK and SKXJ models have become the subjects of discussions because they may seem like the same watch at first glance, but they both have stark differences.

Oftentimes, a quick look into the details is all that any budding collector will need to understand what sets the “K” apart from the “J.” In turn, these seemingly-simple differences have made two excellent timepieces that offer unique experiences for any wearer in search of a beater watch.

How to tell both watch models apart

To best understand which option best suits your needs (unless you’re getting both, it’s vital to tell both the SKXK and SKXJ apart. Fortunately, we’ve put together a list of key differences together so that you can easily determine which one you’re getting first:

The biggest difference between the two variants is in the last letters of their technical classifications, which denotes the origin of manufacture that both respective models come from.

For starters, Seiko’s SKXJ is designated as a model that was manufactured in Japan because of the “J” at the end of its name, making it the quintessential option for wristwear purists. On the other hand, the SKXK pertains to Korea as the area of the manufacturer as designated in the “K” of its name. Keep in mind that the country is a widely-recognized “second location” for Seiko’s offshore manufacturing operations.

When you take a look at the other noticeable differences between the SKXK and SKXJ, a crucial detail—albeit nearly minute—that makes an impact on the overall look and feel of the watch is the dials.

On the “J” model, the dial features a “Diver’s 200m” in a burnt orange color alongside the addition of a “21 Jewels” inlay under it and a “MADE IN JAPAN” inlay at the 6:30 position. Contrary to the J model’s dial, the SKXK goes for a more minimal finish as it doesn’t feature the extra inlays and simply has “7S26-” inscribed in lieu of the “MADE IN JAPAN” label.

Once you have gotten the timepiece of your dreams, keep in mind that you can always modify it to enhance its appearance and functionality. If you are looking for replacement parts, be sure to browse seikomods.com store for a wide array of options.

Conclusion
Although it may not seem like there are stark differences between the two models, the finer details are the ones that set both watches apart as they have their own levels of desirability and character. By taking this guide into consideration, you can easily get a bang for your buck by knowing what model you want more— all while getting your money’s worth in the process!

When it comes to watch dials, cases, straps, and other parts, we’re the leading supplier of Seiko mod parts in the UK that offers various types to make any model unique. Bring out your creativity and escape ubiquity in the watchmaking world by visiting our website and ordering mod parts today!